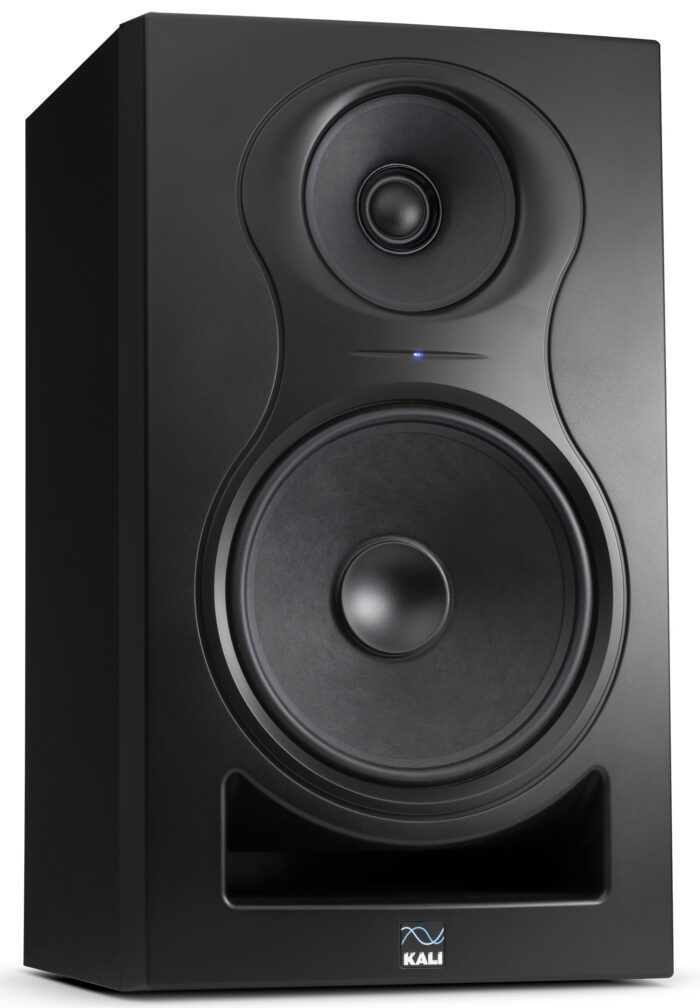 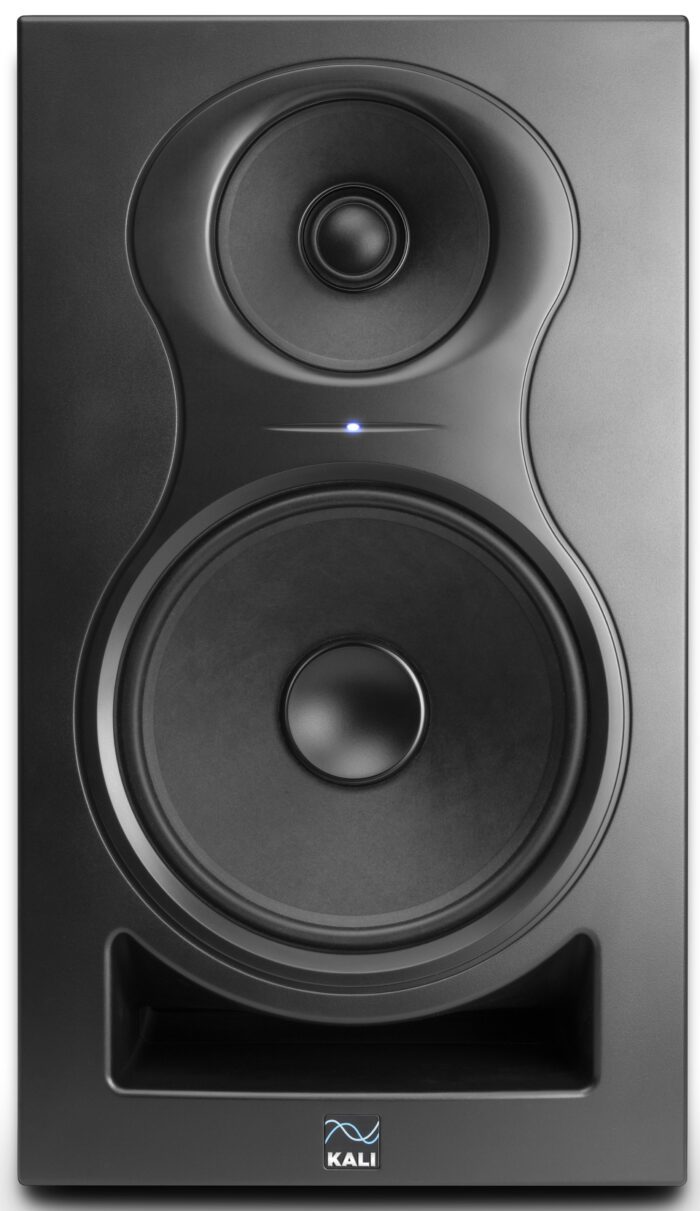 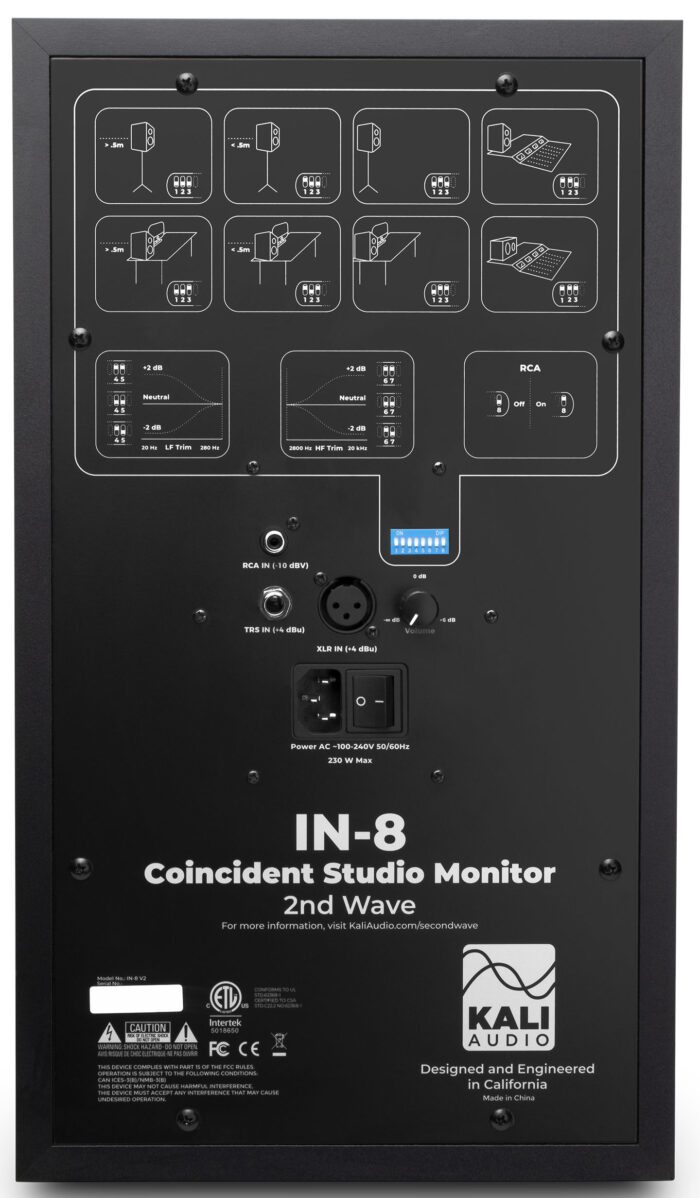 Kali’s IN-8 V2 is one of the most innovative studio monitors ever made. Combining the natural advantages of a 3-way design with hyper-realistic imaging of a co-axial mid-range and tweeter, it offers more transparency, lower distortion, and a soundstage that must be heard to be believed.

The IN-8 V2 Studio Monitor is a speaker like no other. Using the same woofer and tweeter from Kali’s celebrated LP-8 V2, the IN-8 V2 adds a midrange driver that surrounds the tweeter, and acts as its waveguide.

In doing so, both the tweeter and the woofer are unburdened; with a smaller workload, they are able to play more clearly and with less distortion.

The coaxial nature of the midrange and tweeter make the IN-8 V2 an acoustic point source. Off-axis lobing is thereby eliminated, resulting in a stereo soundstage that presents the listener with a hyper-realistic level of detail.

All of this means that the IN-8 V2 is extremely accurate and easy to mix on, and that mixes made on the IN-8 V2 will transfer wonderfully to other systems.

We know. We keep harping on about the ”hyper-realistic” imaging of the IN-8 V2. What does that mean?

When you listen to a stereo set of speakers, you’re hearing information about where instruments and players were placed when the material was recorded. Even with purely digital material, producers can manipulate physical locations of elements in the mix, and you will hear these on a stereo recording.

Not only does this allow producers to create interesting spatial effects, but it means that you can work faster and with more confidence. An accurate soundstage lets you ”see” each element of the mix in front of you, so you can hear exactly what happens when you make changes.

2-way systems with good waveguides, like Kali’s LP-6 V2 and LP-8 V2, do a good job at conveying this spatial information. However, because the tweeter and woofer on those speakers (and most studio monitors!) are separate, this information gets lost in the space immediately above and below the speaker. This means that at the listening position, you’re not hearing the full stereo picture.

The IN-8 solves this problem. The tweeter and midrange share an acoustic center, and the woofer is crossed over at 330 Hz, so the distance between the woofer and midrange is well under a quarter wavelength at the crossover point. This means that the IN-8 is acoustically a point source. As such, it has the same excellent directivity that the LP-6 and LP-8 have at their sides in a full 360 degrees around the speaker. You’re hearing all of the spatial information at the listening position, so the soundstage that you hear will have every detail that’s present in the mix.

The IN-8 V2’s total harmonic distortion is less than 1.4%, which is exceptional. This is the result of unburdening both the woofer and the tweeter, so that both are doing less work. The woofer is crossed over at 330 Hz, a full 2.5 octaves lower than on the LP-8.

The tweeter is crossed over at 3000 Hz, nearly an octave higher than on the LP-8. Taking up the space in between in the hero of the IN-8 system: the 4-Inch, profile-optimized midrange driver. This driver has a lot of work to do. In addition to reproducing midrange frequencies, it also acts as the waveguide for the tweeter. This means that the shape needed to be precisely engineered to provide an ideal dispersion characteristic for the tweeter.

It also means that the midrange needs to stay still. In many other co-axial or concentric systems, high excursion from the larger driver causes intermodulation distortion, and degrades the accuracy of the system. The midrange on the IN-8 is limited to less than 1 millimeter peak excursion, making it acoustically stationary while still providing midrange to keep up with the powerful woofer and tweeter.

A speaker’s given position in a space can drastically change it’s frequency response. A speaker placed against a wall or on a desk will sound very different than a speaker placed on a stand, even in a well-treated space. Hard surfaces like walls, desk tops, and recording consoles can change the low end frequency response of the monitor, and degrade the overall clarity of the sound.

Happily, most of the common positions are fairly predictable and easily corrected.

Kali’s team did our Boundary EQ tuning at The Village Studios in Los Angeles, and came up with boundary compensation EQ settings to help you get the optimum sound for where you need to put your speakers.

Combined with the LF and HF trims, this will ensure that the speakers sound their best no matter what room you’re mixing in, or where the speakers are placed.

The LP-6 V2 and LP-8 V2 both feature balanced XLR and TRS inputs, and an unbalanced RCA input.

The RCA input can be set to -10 dBu sensitivity when you’re using consumer devices like a laptop or smartphone’s headphone jack.