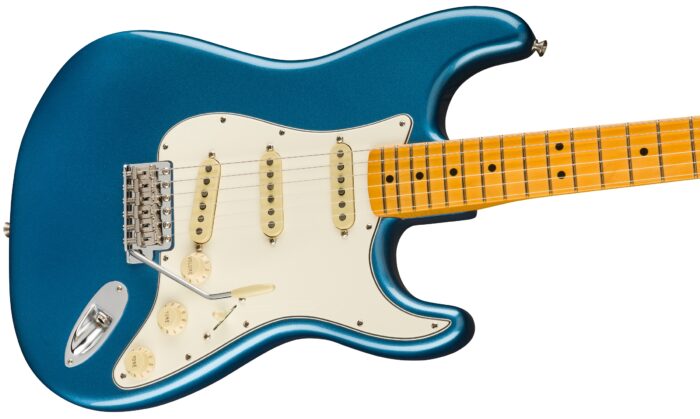 The American Vintage II 1973 Stratocaster® exudes the spirit of the era and is outfitted with a trio of Pure Vintage ’73 staggered pole pickups, a large headstock with dual string trees, a convenient “Bullet” style truss rod nut and a three-bolt neck plate with Micro-Tilt™ mechanism. The “C”-shape maple neck plays like a dream with a 7.25” radius rosewood or maple fingerboard and vintage tall frets. The guitar is offered in three classic colors over ash: Aged Natural, Lake Placid Blue and Mocha, the latter being the first custom color ever to feature a black pickguard on a Strat®. Additional features include vintage-style “F” stamped tuners and a synchronized tremolo with bent steel saddles and cold rolled steel block.

The instruments in the American Vintage II series are direct descendants of the original Fenders: designed for players with a fine appreciation for vintage Fender tone and feel and built with unmatched quality, down to the last screw. These are Fender electrics in their purest form: Fender American Vintage II, the stuff of legends.