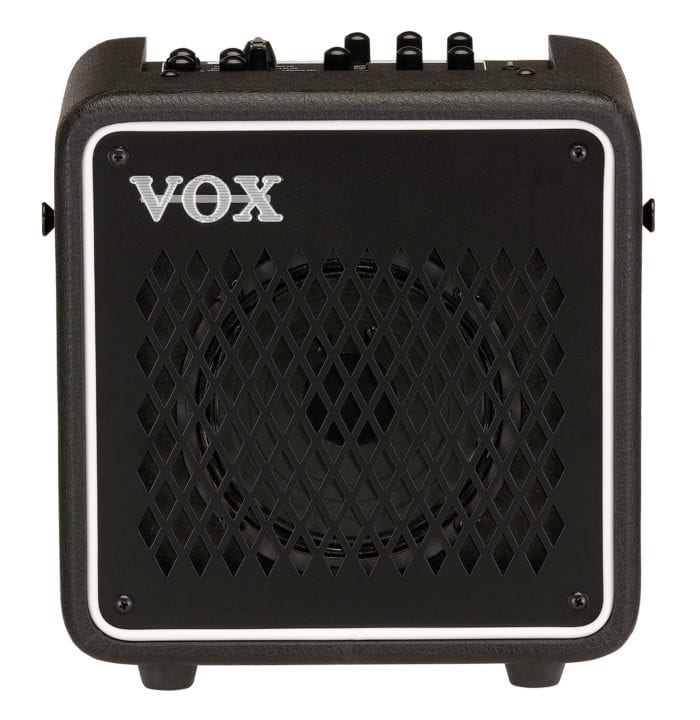 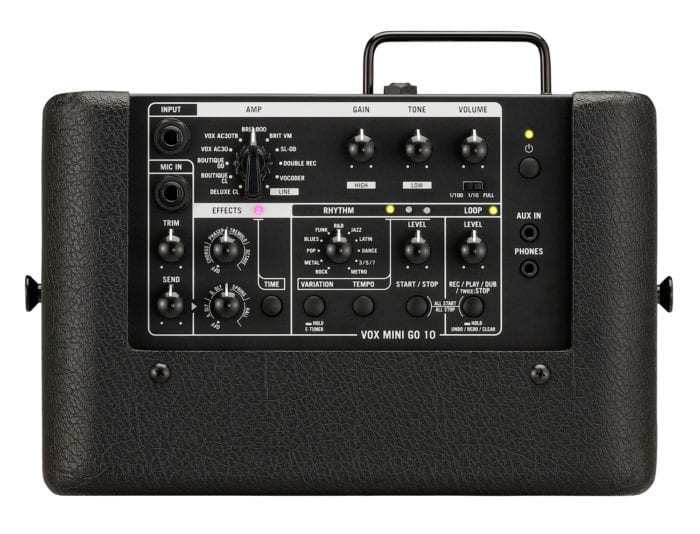 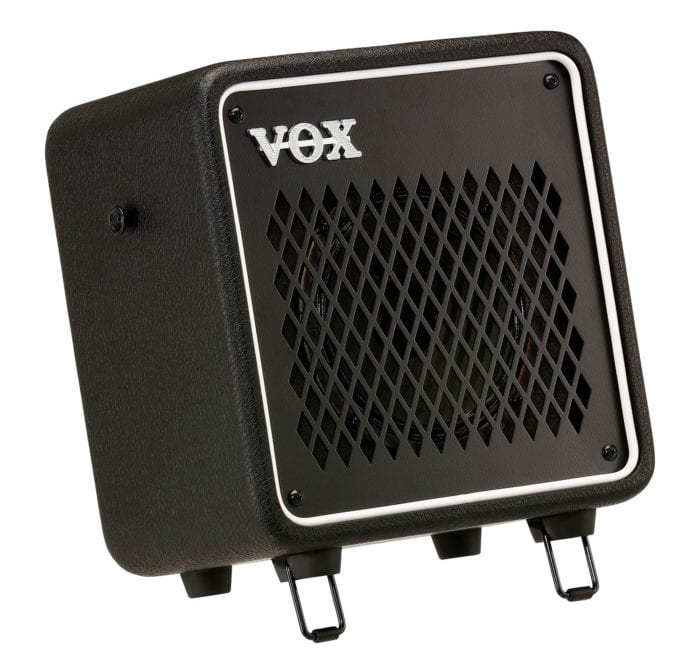 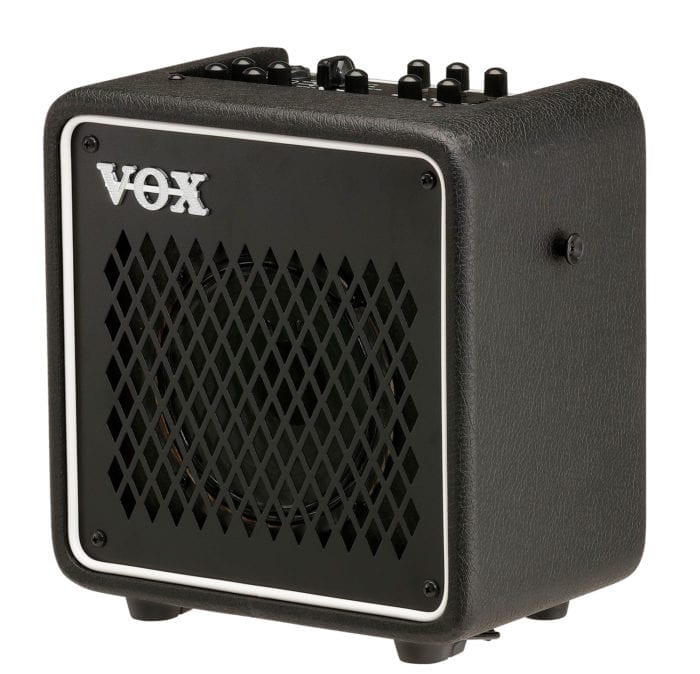 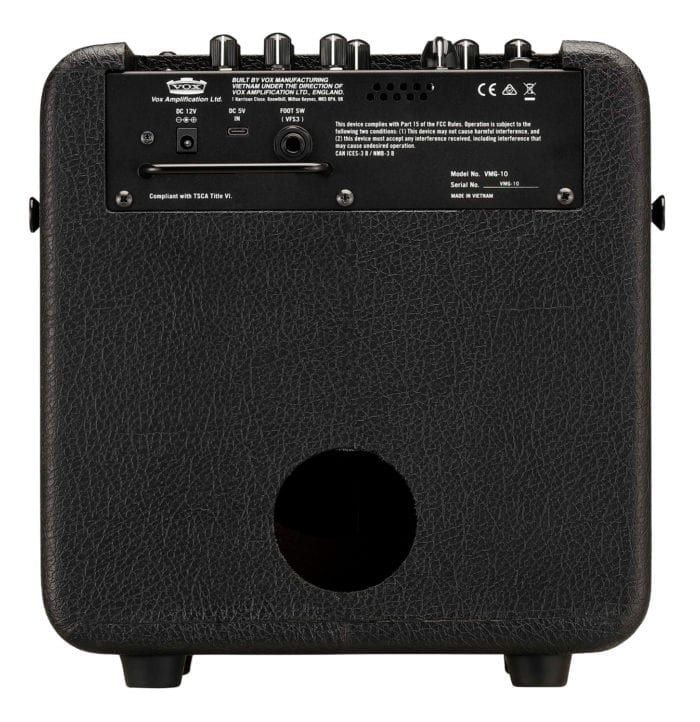 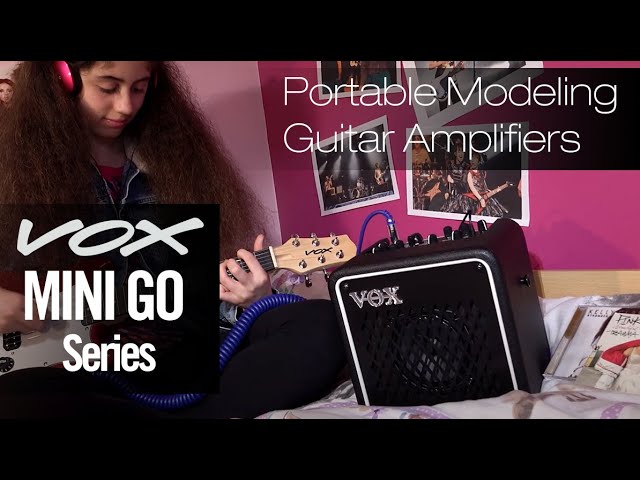 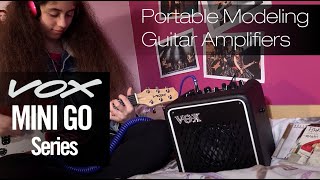 The VOX
MINI GO series guitar amps can be taken with you anywhere you go, letting you
enjoy playing anywhere, whether at home, on the street or in a concert venue.
These amps are lightweight, compact and can be powered by a mobile battery.
They also offer powerful and realistic amp models based on those found in the
Cambridge50, as well as a newly developed vocoder for talking modulation
effects, onboard effects that let you create a diverse range of sounds, a mic
input, AUX input, a headphone jack, a rhythm machine that can play back
patterns from many genres and an onboard looper – all as standard
features. These features allow you to deliver your best performance
whenever you want, wherever you go.

Amp models:
Amp models based on those found in the VOX Cambridge50. The amp models used to
define the sound of the VOX MINI GO series use the “VET” modeling technology
used on the VOX Cambridge50, which offers a realistic and responsive sound.
Selectable amp models include the traditional VOX AC30 type, an amp stack model
representative of the 80’s, a boutique amp, and a high-gain amp with massive
distortion. The LINE setting is useful when plugging in an electric acoustic
guitar or keyboard. A new and unique vocoder has been added for “talking
modulation” effects that sound as if you’re playing a talking guitar, which you
can use by playing the guitar while singing or talking into the mic (or while
you’re picking the guitar strings, if you don’t have a mic connected).

DELUXE CL –
This dual channel, 22W blackface design from the 60’s used 6V6power tubes and a
tube driven reverb to produce a big sound at a lower wattage. Our modeling is
based on the Vibrato channel.

BOUTIQUE CL
– The clean channel of a high-quality amp that was produced only on special
order, and was known as the overdrive special. With a beautifully rounded low
range, a sharp midrange attack, and a sweet treble register, this is ideal for
single coil pickups.

BOUTIQUE OD
– The overdrive channel of a 100W high-quality amp that was produced only on
special order, and was known as the overdrive special. The wonderful sustain
obtained by raising the GAIN control is smooth and soulful.

VOX AC30 –
The normal channel of AC30, which is a typical guitar amplifier of VOX. The
clear high range of the Celestion alnico “Blue” speaker, as well as the rich
midrange, deliver a captivating clean sound.

VOX AC30TB
– The classic “top boost” circuit of the 1964 AC30. It delivers a smooth and
refined top end, a majestically deep overdrive, and a rich, brilliant clean
sound.

BRIT 800 –
A UK-manufactured 100W single-channel head with master volume made in 1983. Turn
the GAIN control all the way up to get the thick, snarling hard rock and heavy
metal sound that dominated the 80’s.

SL-OD – The overdrive channel of a snakeskin-covered 100W
amp head built in 1991. With an open low-end and a compressed mid/high range,
its powerful, heavy sound delivers a forceful tone that will not break down
even with the most extreme gain settings.

DOUBLE REC – The modern high-gain channel from a wildbeast
of an amp. Its deep and loose low-end, sparkling highs, and monstrous gain are
ideal for guitars tuned as low as possible, or for metal acts wielding
seven-string guitars.

VOCODER – When you sing or speak into the microphone while
playing the guitar, the talking modulation effect is activated, which makes it
sounds as if the guitar is singing. This is effective when you speak clearly
while changing your voice.

LINE – Only a tone control amplifier that produces a clean
tone. This works best with audio signal input from a line-level instrument like
an electric acoustic guitar or keyboard.

Built-in effects adds color to the guitar sound
The effects on the VOX MINI GO series have been revamped for a clearer sound
that matches the sound of modern-day music with more precise modeling, which
also lets you create a wider range of sounds. Effects types available include
chorus, phaser and octave. Including the delay/reverb type, this gives you
atotal of eight effect types.

Rhythm machine makes playing even more fun!
The built-in rhythm patterns on this series cover various genres and metronome
types. There are three variations for each genre, for a total of 33 types of
rhythm patterns. Use the selector to easily call up a rhythm pattern and then
freely adjust the tempo and volume to effortlessly enjoy a rhythm-backed jam
session, develop some riff ideas, or work on your sense of rhythm — there
are so many ways to enjoy these amps.

Can be powered by a mobile battery—the perfect choice for
street performance as well
The VOX MINI GO series can be powered either by a commercially available mobile
battery or with the included AC adapter. These amps are the perfect choice for
street performances and performing outdoors as well. Use the attached carrying
strap to easily take the amp with you wherever you go and have fun playing
guitar at any place, any time.

Features a
variety of input/output jacks—great for playing and singing solo!
Aside from an input jack for your guitar, these amps also feature a variety of
other input/output jacks. You can adjust the volume for the mic input and also
apply delay/reverb effects to the input signal, which is optimal for situations
like playing and singing solo. Also,  you can select the VOCODER amp model
for a talking modulation effect that sounds as if you’re playing a talking
guitar, which you can use by playing the guitar while singing or talking into
the mic. The amp also features an AUX IN jack for your music player or other
external sound source, which gives you three simultaneous input channels
including the signals from your guitar and mic. Further, this amp has a
built-in cabinet simulator, which you can hear through the PHONES jack. This
cab sim adds the characteristics of a guitar amp cabinet to the output signal
just before it reaches the power amp. This is perfect when recording to an
audio recorder or when practicing in headphones.

Built-in
looper functionality
The looper on these amps lets you loop the playback of phrases you record with
your guitar or mic and then play along for a jam session, or overdub again and
again in real-time performance. When using the looper along with the rhythm
machine and then recording while the rhythm pattern plays, the length of the
loop when you stop recording is adjusted quantized) to match the length of the
measure.
Also, when you play a rhythm pattern while the looper is playing, the tempo of
the rhythm is automatically set to match the loop’s length. Use the optional
VFS3 (sold separately) to freely mix the three loop modes while you play.
Mode 1: Record → playback → overdub
Mode 2: Record → overdub → playback
Mode 3: Clear the previous phrase and record → playback
(Only mode 1 can be used without a foot switch.)

Selectable
power amp wattage
Switch between three stages: FULL, 1/10 or 1/100. This lets you make quick
adjustments to the volume to match your playing environment.

Use a VFS3
foot switch to control various features such as the rhythms and looper
Connect a VF3 foot switch (sold separately) to control the following functions: